On January 4, 2021, MACDL filed an amicus letter, written by Attorney Amy Belger, in support of an application for Further Appellate Review in a case in which the trial judge concluded that members of the Narcotics Bureau of the Springfield Police Department intentionally destroyed evidence favorable to the defendant. A Springfield Police sergeant ordered the City Forester to remove trees near the scene in order to prevent the defense from recreating an officer’s alleged observations of the defendant, one day after the court ordered the prosecution to provide the defense with the police binoculars he allegedly used. As MACDL’s letter states, this was “undisclosed, intentional misconduct by a police sergeant with rank and responsibility, to insulate a fellow officer’s testimony from scrutiny and undermine the purpose and intent of a judicial order, aimed squarely at the heart of the defense.” This misconduct is consistent with a pattern perpetrated by this particular sergeant, and by the Springfield Police Department generally. Under these circumstances, MACDL argues, police misconduct requires dismissal of the indictment. Read full text of the letter below. 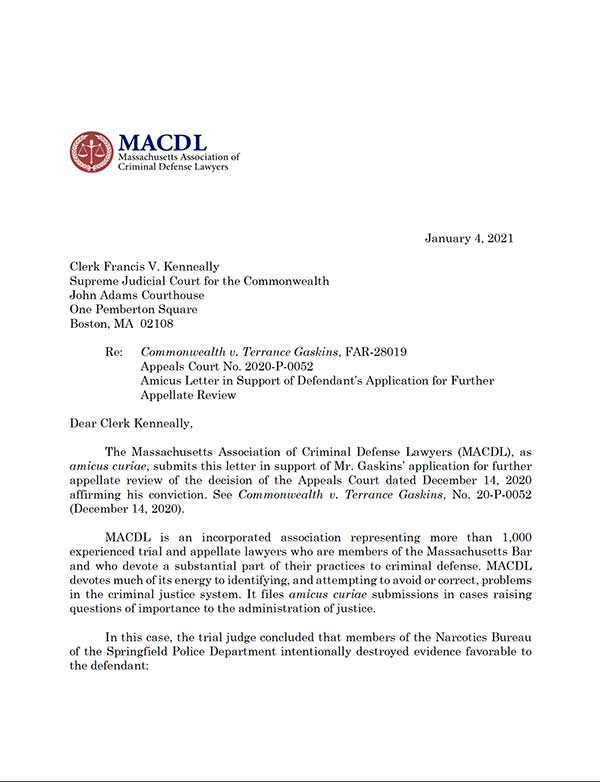 By Ruth O'Meara-Costello|2021-01-04T13:49:24-05:00January 4th, 2021|News|Comments Off on MACDL Amicus Supports Further Appellate Review in Case of Intentional Destruction of Evidence by Springfield Police

As COVID cases began rising as the weather got colder, MACDL president John Amabile sent a letter to the Chief Justices of the SJC, Superior, and District Courts recommending best practices for court administration. Read more…