On February 28, 2019, MACDL submitted a comment in response to the amendment to Mass. R. Crim. P. 12 proposed by the Supreme Judicial Court’s Standing Advisory Committee on the Rules of Criminal Procedure. MACDL joined the Committee for Public Counsel Services (CPCS) in expressing support for allowing conditional guilty pleas for the first time in Massachusetts (following the SJC’s decision in Commonwealth v. Gomez, 480 Mass. 240 (2018), while also suggesting that the rule ultimately adopted should allow for conditional guilty pleas over the objection of the prosecution under limited circumstances.

Read the letters from CPCS and MACDL by clicking the image links below. 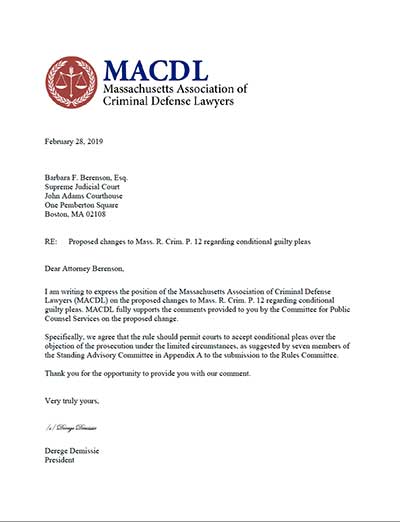 A plan to identify a global resolution for any controlled substance conviction resulting from a Hinton Lab case between May 1, 2003 and August 30, 2012.

The brief argues that the defendant cannot be forced to accept virtual suppression hearing.