In 2015 there was a brawl at a bar in Plymouth resulting in serious injuries to an off-duty corrections officer. Detective Greg Smith of the Plymouth Police led the investigation which resulted in charges of mayhem and assault and battery causing serious bodily injury against Alex Johnson. After an evidentiary hearing on an O’Dell motion to dismiss, Judge Cosgrove found that Greg Smith failed to provide exculpatory evidence that the defendant was not involved in the charged offense. Specifically, Judge Cosgrove wrote, “[i]f, as [the witness] claimed, the defendant was standing some ten feet away at the time, he could not have been the assailant. Whether Smith believed him or not, there is no question that Fitzgerald’s account is exculpatory, and should have been turned over to the defendant.” You can read the decision here and in the link below this article.

By way of background, Smith, a police officer since 2008 and detective for over 5 years at the time of the hearing, interviewed multiple witnesses who were present at the scene of a bar fight in Plymouth. Smith did not record those interviews, did not get written statements from any of the witnesses, and did not write any reports. Smith was among the witnesses called to testify before the grand jury and did not share information about an undocumented interview in which the witness told Smith that Johnson was 10 feet away from the fight. Smith testified at the motion hearing that he did not preserve the witness’s statement because he did not believe the witness. The witness statement only became known later, when Johnson’s defense counsel sent her own investigator in preparation for trial to speak to witnesses. Smith also failed to record an identification made from a photographic array, and failed to follow police procedures more generally.

Despite the failure to provide the exculpatory evidence, Judge Cosgrove denied the motion to dismiss based on his finding that the prosecutor was unaware of the undocumented statement. Despite the fact that Smith is a seasoned police officer having achieved the rank of detective, Cosgrove found Smith’s failure to produce the exculpatory evidence was “more insouciant than malevolent.” The case went to trial, and Smith’s testimony did not impress the jury who came back with not guilty verdicts for the defendant and all co-defendants.

MACDL expects the Plymouth County District Attorney’s Office to add Greg Smith to its Brady List (and to create a Brady List if it hasn’t done so already) and to notify defense counsel in all cases involving Smith of this major transgression. All investigations by Smith, past and present, warrant skepticism and require careful scrutiny. 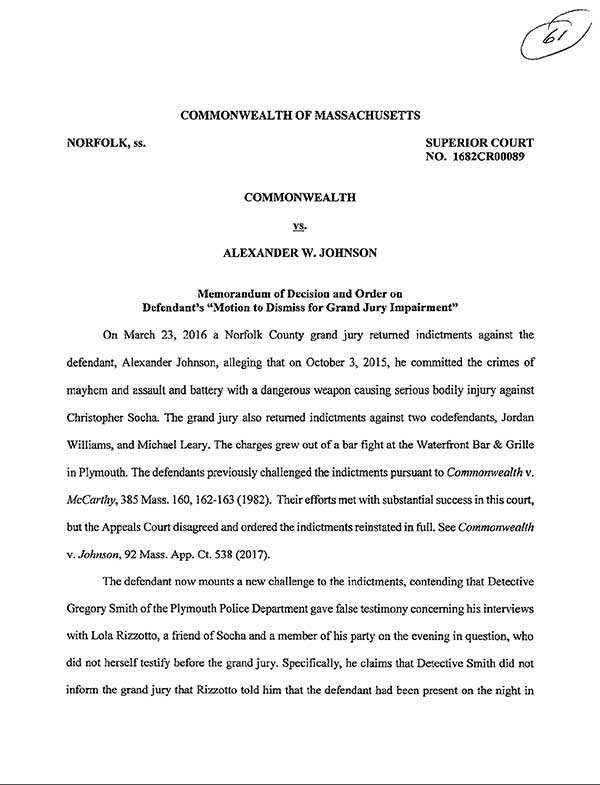