June 15, 2020 — In reply to the Justices of the Supreme Judicial Court

MACDL’s Board of Directors and Racial Justice Committee take seriously the Supreme Judicial Court’s declaration that we all must all harness the power and privilege that comes with our professional accomplishments to end racial injustice. There is no neutrality in racism; failing to take aggressive measures allows racist practices to continue.

Nowhere is structural racism more conspicuous than in the criminal justice system, where Black people are routinely and unnecessarily shackled by police for alleged non-violent offenses. In that inhumane condition, they are brought into courtrooms to determine whether they should be freed or imprisoned without conviction of any crime. Each dehumanizing step places Black men and women in peril of losing their jobs, their families, their homes, their freedom, and their very lives.

We can dismantle structural racism today. Consider how the following could bend the arc of the moral universe toward justice:

Establish A Presumption for Summonses for Most Crimes
The headlines are flooded with violence by police officers against Black citizens at the time of arrest — a flashpoint that could be wholly avoided by changing the rules to require court summonses for all misdemeanors and non-violent offenses. This would not only eliminate arrests for all alleged minor infractions such as using a counterfeit $20 bill to buy cigarettes, as happened to George Floyd, but also for fraught and unnecessary police encounters involving possessory offenses, assault and battery, breaking and entering, and similar offenses. It would not only prevent a majority of the police violence against Black lives, but would dramatically reduce false complaints of resisting arrest and assault and battery on a police officer—charges that are often a smoke screen for police brutality.[1]

Extend Right to Counsel to Clerk’s Hearings
Once summonsed into court, all defendants should be entitled to counsel. This includes at clerk’s hearings, where Black people are more likely to have complaints issued against them than are white people.[2] With more pretrial diversion, fewer Black people would have protracted court proceedings or a criminal history. As all practicing lawyers in District Court can attest, a large percentage of cases are dismissed on the trial date when complainants fail to appear. These cases should be weeded out before defendants ever appear for arraignment. Similarly, the courts should take probable cause hearings seriously, requiring the Commonwealth to either proceed by indictment or probable cause within 30 days.

Expand Automatic Discovery to Include IA Records
In discovery, defendants should be entitled to automatic disclosure of Internal Affairs reports of all involved officers, and be permitted to introduce evidence of racial bias at trial.

Explore Implicit Racial Bias and Take Measures to Ensure Juror Diversity
In voir dire, attorneys should be permitted to explore racial bias. Rules regarding composition of the venire should be amended so that defendants can be tried before peers from their community rather than a county-wide jury that too often lacks racial diversity. During selection, a prospective juror should not be struck because he or she expresses skepticism about police credibility.

Ensure Fair and Just Sentences
After trial, no defendant should be sentenced until a future date when the judge shall receive from the defense a social worker’s report that describes the defendant’s background and circumstances, including how structural racism has impacted the defendant’s life. To assess progress, the Courts should collect and publish data on race and sentencing.

Assemble a Commission Inclusive of the Black Community And Take Decisive Action
There is much work to be done. For too long the sole fix has been more introspection and more training. But empirical and anecdotal evidence tells us that training — even videotaping — doesn’t change behavior.[3] Slashing the number of arrests and deconstructing institutional racism does. As the Justices point out, this must be a time not just of reflection but of action. Black lives depend on it.

We stand ready to help.
MACDL’s Board of Directors
MACDL’s Racial Justice Committee 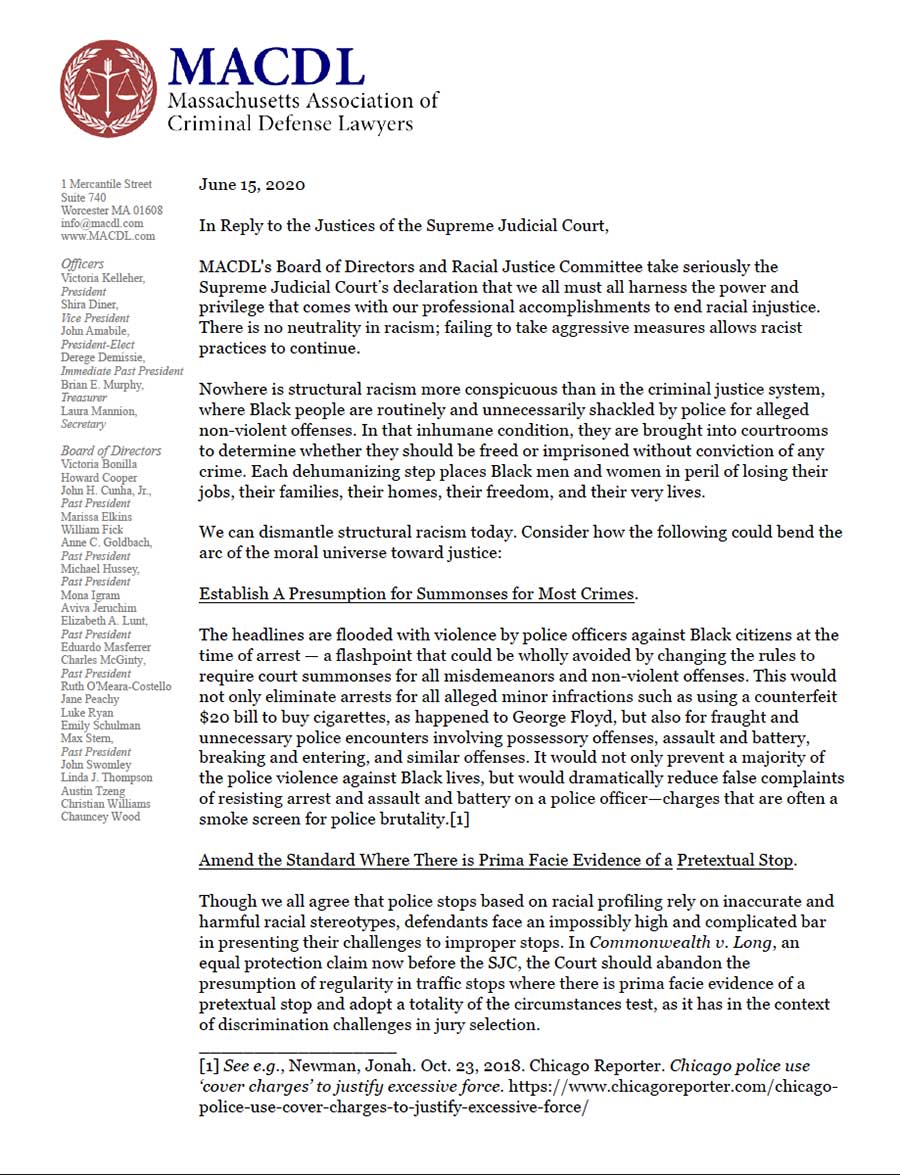