MACDL today, October 17, 2019 MACDL today, October 17, 2019, joined with Hampden Lawyers for Justice and the American Civil Liberties Union of Massachusetts (“ACLUM”) and a team of lawyers from the law firm Morgan Lewis serving as pro bono counsel to file an amicus brief in Carrasquillo v. Hampden County District Court, an appeal pending before the SJC and scheduled to be argued in November.

In this case, CPCS is challenging the order of the Hampden County District Court requiring the CPCS Hampden County PD Office to accept all appointments out of the Springfield District Court for which bar advocates could not be found. The appeal is a vehicle to discuss the growing shortage of bar advocates across the Commonwealth. In Hampden County, in particular, this shortage amounts to a crisis. In the brief filed today MACDL and its allies agree with CPCS that the source of the problem is the Legislature’s failure to increase rates paid to bar advocates in the 15 years that have passed since the Supreme Judicial Court (“SJC”) instructed the Legislature to address this issue in 2005. The amicus brief now urges the Court to increase rates on its own authority. Because the legislature has failed to act and that failure is now causing a breakdown in the criminal justice system, MACDL’s brief argues that the only solution to this constitutional crisis is an immediate concrete and substantial increase in rates paid to bar advocates and that the SJC has the authority to order this increase effective immediately. Specifically, MACDL et al. advocate for the following rates:

A copy of MACDL’s brief can be viewed below 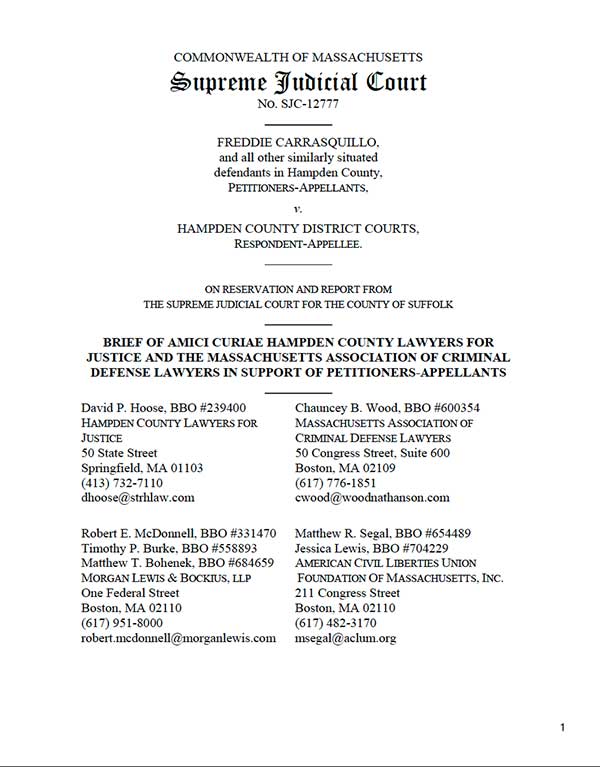