Boston Municipal Court Judge Richard Sinnott’s decision to place a lawyer in handcuffs and detain her for several hours for “interrupting” him is a gross abuse of power that requires judicial disciplinary action.

Susan Church, a prominent lawyer who was awarded the Pro Bono Publico award by the Supreme Judicial Court in 2017, appeared pro bono on behalf of the National Lawyers Guild of Massachusetts and represented a protestor at the Straight Pride Parade charged with disorderly conduct. The Suffolk County Assistant District Attorney informed Judge Sinnott she was dropping the disorderly conduct charge before arraignment, but the judge refused—despite lacking the authority to force prosecution. Attorney Church cited several legal authorities in support of her position.

Claiming Attorney Church talked over him while “filled with passion in representing her client”, Judge Sinnott ordered court officers to place Attorney Church in handcuffs and into custody where she remained for over three hours. MACDL Strike Force Attorney Max Stern responded immediately to represent her, along with MACDL Attorneys Derege Demissie and John Swomley, and members of the ACLU of Massachusetts.

Judge Sinnott’s actions constitute egregious judicial misconduct, demonstrate a lack of proper temperament, and violated the constitutional and statutory rights of both the accused and Attorney Church. Moreover, his refusal to allow the executive branch to function independently underscores either an alarming lack of rudimentary understanding of the constitutional principle of separation of powers, or a belief that he would not be held accountable. Unless addressed immediately and publicly, his misconduct will have a chilling effect on defense lawyers who have the constitutional duty to zealously and vigorously advocate for their clients.

MACDL calls for an immediate investigation of this matter and a formal inquiry by the Administration of the Trial Court and the Massachusetts Commission on Judicial Conduct.

About MACDL
MACDL is the only statewide association of lawyers in Massachusetts devoted exclusively to serving all segments of the defense bar. According to its mission statement MACDL’s mission is to preserve the adversary system of justice; to maintain and foster independent and able criminal defense lawyers and to ensure justice and due process for persons accused of a crime. MACDL will be an advocate for the advocate. 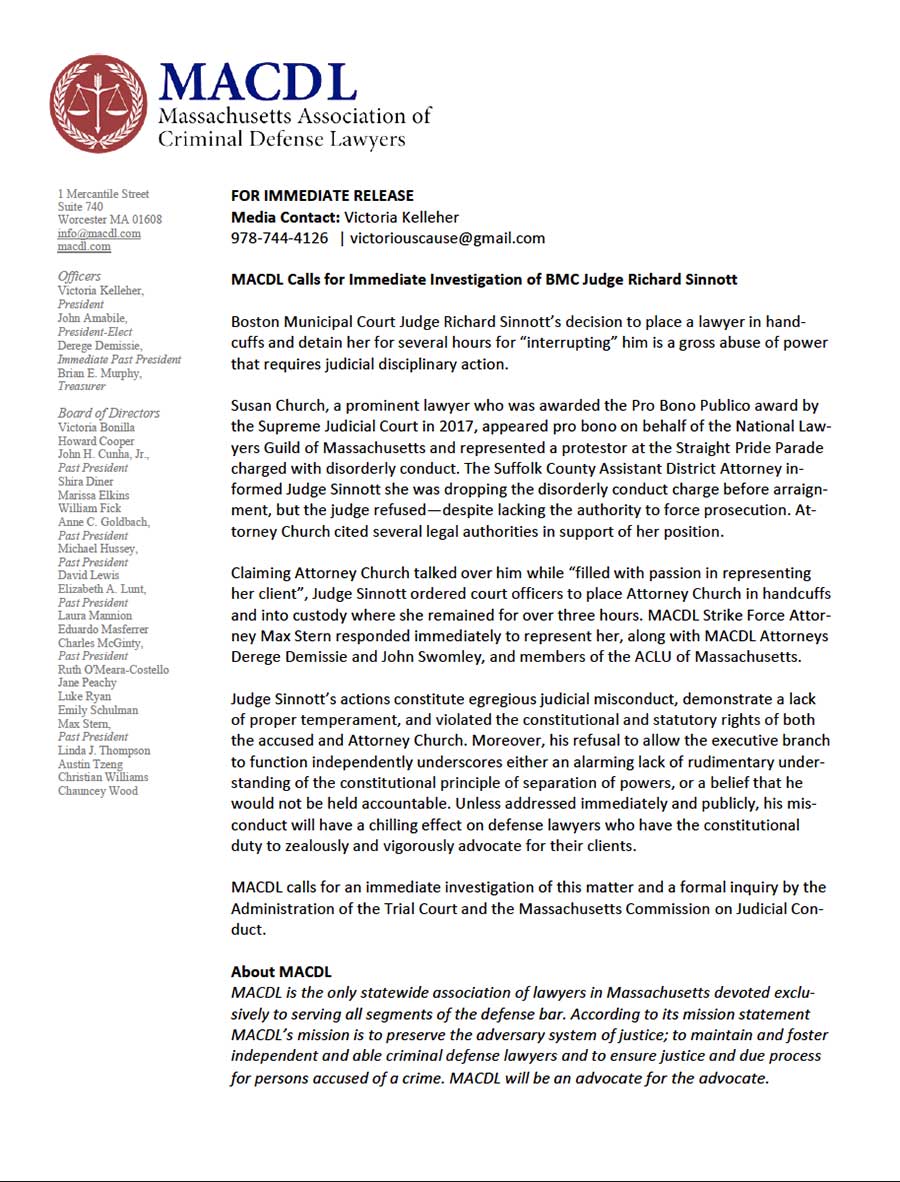 Inside East Boston District Court, you might not think there was a highly contagious virus in our midst. Although masks are mandatory for everyone, WBUR found numerous court staff in the building not wearing them properly, or at all. Read or listen to full report…