Bail is not a form of punishment. It is set in almost every case to ensure that those charged with a crime return to court during the lengthy period that it may take for the case to resolve. If bail is set in an amount the person can’t afford, he or she will be held in jail without any conviction. In other words, based solely on probable cause to arrest, a very low standard, a relatively poor person can be detained months or even years without ever having been found guilty of a crime.

Under our constitution, no court can demand excessive bail, and our legislature has reinforced that provision by requiring a presumption of release on personal recognizance, or the defendant’s promise to appear. Even so, far too many people are detained for no reason other than that they cannot afford bail, resulting in worse case outcomes and community devastation. Those held pretrial are disproportionately Black and Latinx.

In 2013, community activists formed the Massachusetts Bail Fund (MBF) to save people trapped in this unjust system. They fund-raised small amounts of money to bail those who could not afford to do so themselves. Central to MBF’s work, the organization has always maintained a commitment to charge-neutral assistance, meaning they will post bail regardless of the crime alleged.

In the last eight years, they have posted approximately 3,600 bails — saving people that would otherwise have lost their homes, their jobs, their healthcare and their children. Justice was served because those released were able to effectively defend their cases in the same way as people who could afford bail.

Presently, the COVID-19 pandemic poses a significant risk to the lives of people in jail, and the courts have postponed all trials since March. Without MBF’s vital work, hundreds more poor people, many with pre-existing medical issues, would have been held pretrial at greater risk of infection to themselves, their families, and personnel.

MACDL, the only statewide legal association devoted to serving all segments of the criminal defense bar, preserves the adversary system of justice; maintains and fosters independent and able criminal defense lawyers, and ensures justice and due process for persons accused of crime. We deeply appreciate the MBF and the opportunities that it has given so many to work, raise children, care for their families, pursue their education, participate in their communities, and meaningfully defend themselves in court. We stand behind the MBF in their life-saving work and fully support their mission to #FreeThemAll. 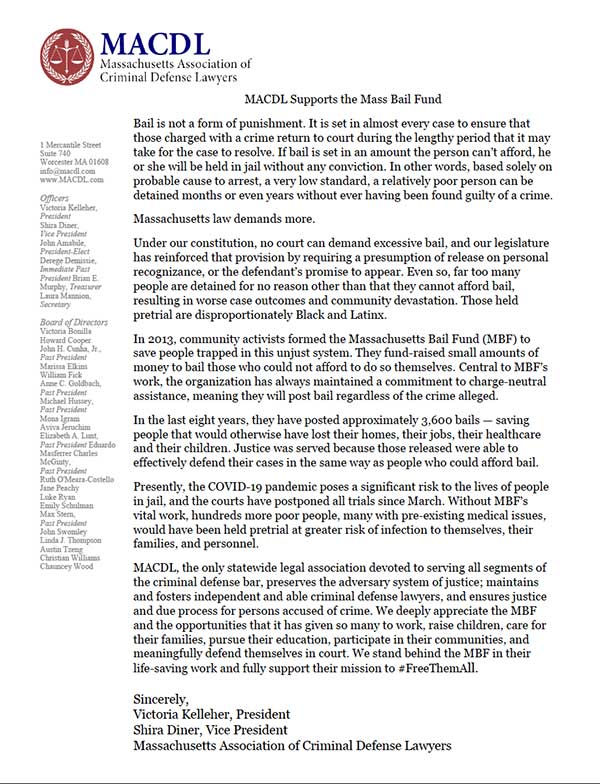