The Massachusetts Association of Criminal Defense Lawyers is outraged by the most recent show of force and violence against Ahmaud Arbery, Breonna Taylor, and George Floyd, events that are endemic to Black America and reflect the history of racism and oppression in this country.

But it is not enough to be outraged. We must confront how our criminal justice system has failed people of color.

Our system has perpetuated racism through racial profiling, pretextual stops, and biased exercises of discretion. Court proceedings too often engage in willful blindness rather than a thorough inquiry. This systematic racism has led to mass incarceration: while African Americans account for only 7% of the state population, they make up 26% of state and county prisoners. And incarceration of black parents results in the breakup of black families.

Change requires checking our biases, confronting our fears, and challenging the current power structure. We should not be arrogant or overly sensitive in our self-searching; black lives depend on an honest appraisal. Be constantly aware of your own bias and the role it plays in your life and others. Challenge explicit racism and implicit bias in court proceedings. Like those of us who enjoy privileged lives, no parent should fear their black children may not survive every time they walk out the door.

As criminal defense lawyers, we must dismantle the oppression that black people endure while sleeping in their beds, standing on their porch, running down their street, or taking their children to the park. Our voices, individually and collectively, have privilege and power; we must use them as an arsenal to effect change.

George Floyd, a 46 year old-father, son and brother, who was killed by Minneapolis police officer Derek Chauvin when he clamped his knee on George Floyd’s neck for over 8 minutes — for 2 minutes and 53 seconds of that time, George Floyd was non-responsive. May 25, 2020.

Breonna Taylor, a 26 year-old black woman and EMT who was shot to death by police when they broke down her door and stormed her home in Louisville, Kentucky. March 13, 2020.

Ahmaud Arbery, a 25 year-old black man who was shot to death by a white father and son, while jogging through the streets of Brunswick County, Georgia. February 23, 2020.

Terrence Coleman, an 31-year-old black man who had committed no crime and was shot to death in front of his mother by a Boston police officer. Oct. 30, 2016. 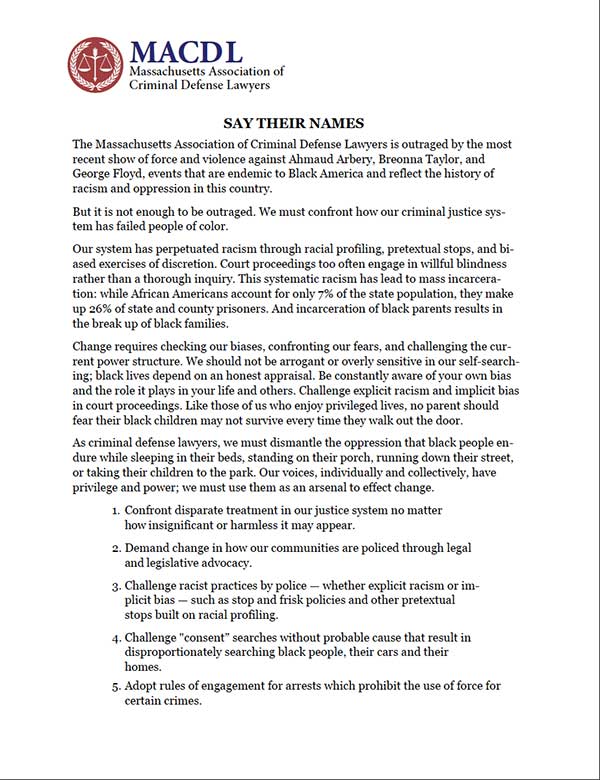 Meet the New Board

Thank you all for your participation