The Road to Commonwealth v. Long

In the midst of an otherwise horrible week for Justice in America, the Massachusetts Supreme Judicial Court issued a ground-breaking decision on racial justice on September 17, 2020. In Commonwealth v. Long, SJC-12868, the Court unanimously agreed that its previous remedy for addressing racially motivated traffic stops under the equal protection clause of the state and federal constitutions, a statistical showing articulated in Commonwealth v. Lora, was inadequate and unworkable. The Court unanimously agreed that a defendant must be permitted to rely on other means to demonstrate that a traffic stop was impermissibly “motivated by race”, and need only establish a “reasonable inference” of that fact. The Court placed the ultimate burden on the Commonwealth to prove that a stop that appears to have been motivated in whole or in part by race, was not motivated at all by race. Two members of the Court would have gone even further, and would have banned all pretextual stops under article 14 of the state constitution.

These decisions were remarkable for many reasons, not least because they marked an abrupt about-face from the Court’s own precedent, reaffirmed just over two years ago in Commonwealth v. Buckley. This was not happenstance. Rather, it was a result of a concerted effort by a team of attorneys who worked together to urge the Court to reach this result.

First, attorney John Warren, a former public defender and current solo practitioner, was appointed to represent Mr. Long in the Suffolk Superior Court. He built a remarkable record. Recognizing that the existing precedent in Lora required him to make a statistical showing of racial profiling, he conducted comprehensive discovery. Using all the tools at his disposal, including FOIA requests, he obtained a multi-year record of traffic stops and FIOs by the arresting officers, broken down by race. He then retained a statistician to analyze that data and the racial make-up of the neighborhoods in which the arresting officers had conducted their stops. He made sure her statistical analysis could withstand the scrutiny that such analyses had been subjected to in past cases, account for gaps in the data and making his statistical case unassailable. He then demanded and received an evidentiary hearing in which he presented all this evidence in support of an argument that his client had been stopped because of race. The trial judge denied the motion, disputing the adequacy of the statistical showing. Undaunted, Attorney Warren appealed, and he continued to represent Mr. Long on appeal. Based on the constraint of precedent, his only path was to argue that he had satisfied the Lora protocol.

The SJC took the appeal on direct appellate review and quickly issued an amicus solicitation asking whether the Lora protocol was workable. A coalition of interested groups, including MACDL’s amicus committee, CPCS, ACLUM, the Charles Hamilton Houston Institute for Race and Justice (CHHIRJ) at Harvard Law School, and the New England Innocence Project (NEIP) immediately took note. Representatives from these organizations quickly met to sketch out a strategy.

These organizations had laid the ground work for much of this discussion in a previous case, Commonwealth v. Buckley. That case presented an undisputed pretextual stop but not a claim of racial profiling. Still, CPCS drafted a powerful amicus brief, joined by MACDL, challenging the legality of pretextual stops. CPCS noted that pretextual stops have a disproportionate effect on people of color. Both ACLUM and the Lawyers’ Committee for Civil Rights (LCR) also submitted amicus briefs, urging the Court to ban the practice of pretextual stops. Unfortunately, in Buckley, the SJC unanimously rejected that invitation.

Nevertheless, building on this past work, the amicus parties in Long decided to file two different briefs, making different arguments. First, CPCS and ACLUM decided to argue that Attorney Warren had satisfied the Lora protocol and to ask the Court to give lower courts guidance about how to analyze Lora challenges. The brief urged the Court to revise the Lora protocol, noting that it had provided relief for only a single defendant in the years since it had been created, despite the recognized racial disparities in traffic stops in the Commonwealth. Second, MACDL, CHHIRJ and NEIP, joined by LCR, decided to argue that the result in this case illustrated that the Lora protocol was unworkable in practice because of its complexity and expense and would soon become impossible to satisfy because the legislature had refused to require police departments to continue to collect data on traffic stops necessary for such claims. Rather, MACDL, CHHIRJ, NEIP and LCR insisted that the only solution was to abandon the Lora protocol and adopt a “would have” test asking whether an objective officer would have made the traffic stop in question absent an improper motive (e.g. racial profiling). More simply, this second amicus brief asked the Court to ban all pretextual stops.

The coalition – CPCS, ACLUM, MACDL, CHHIRJ, NEIP, LCR – then held a series of moot courts with Attorney Warren to help him prepare for the oral argument. These sessions were crucial to help him navigate complex arguments addressing both the Lora precedent and the inevitable critiques of the precedent, laid out in the amicus briefs. It was a daunting task for anyone.

The oral argument itself was truly remarkable. Attorney Warren was spectacular. From the very beginning every member of the SJC made clear that they were fully engaged in the argument. And thanks to the generous views of Chief Justice Gants about access to justice, oral argument extended well past the allotted time of thirty minutes. The Court heard more than an hour of argument! It was clear to all who watched that the Court had absorbed and appreciated the remarkable statistical presentation by Attorney Warren as well as the amicus briefs of the parties. Every single justice appeared troubled by the severity of the problem of racial profiling in traffic stops and the blatant inadequacy of the Lora remedy to address it.

The SJC’s decision vindicated Attorney Warren’s showing – holding that he had easily satisfied Lora – but also recognized that they had set the bar too high. Their rejection of their protocol as too difficult to meet was a truly remarkable holding. Just two years earlier, in Buckley, Justice Cypher, writing for a unanimous Court, had given no indication that she saw any problem with Lora or pretextual stops. Despite this, the Court unanimously embraced much of both the solutions proposed by the amicus briefs. They agreed with CPCS and ACLUM that the statistical showing required under Lora was not as rigorous as the trial judge thought. And they agreed with MACDL, CHHIRJ, NEIP and LCR that it was crucial to allow defendants to demonstrate that traffic stops were motivated by race using any evidence at hand, not just statistics. While they did not consider a request to ban pretextual stops and adopt a “would have” test, they adopted many factors that the MACDL coalition’s amicus brief had identified in guiding a trial court judge in determining whether a traffic stop was motivated in whole or in part by impermissible racial bias. And two members of the Court agreed with the MACDL coalition’s amicus argument that the better solution is to ban pretextual stops altogether. Justice Budd, writing that concurring opinion, took the opportunity to write a sweeping opinion on the history of pretextual stops and the relationship between criminal procedure and structural racism. She reminded the Court, the bar and the public that criminal defense lawyers have been battling systemic institutional racism for at least 80 years. Her concurrence is truly a masterpiece, and is the culmination of years of work by Attorney Warren and this group of amicus partners.

Of course, each of these organizations are made up of individual attorneys who worked tirelessly to advance the cause of racial justice in their amicus work on this case. Among others, they are: Chauncey Wood (MACDL), Radha Natarajan (NEIP), Katy Naples-Mitchell (CHHIRJ), Oren Nimni (LCR), Rebecca Kiley (CPCS), Matt Segal (ACLUM), Jessica Lewis (ACLUM) and Jessie Rossman (ACLUM). Thanks to their efforts, the Commonwealth is a bit more just today than it was last week.

The Long decision is an example of what can happen when fantastic advocacy is paired with coordinated and sustained amicus support. MACDL will continue to advocate for solutions to the issues that are important to our members, including issues of racial justice in the face of systemic racism. If you think you have a case that presents such issues, please contact our amicus committee co-chairs, Chauncey Wood and David Rangaviz. 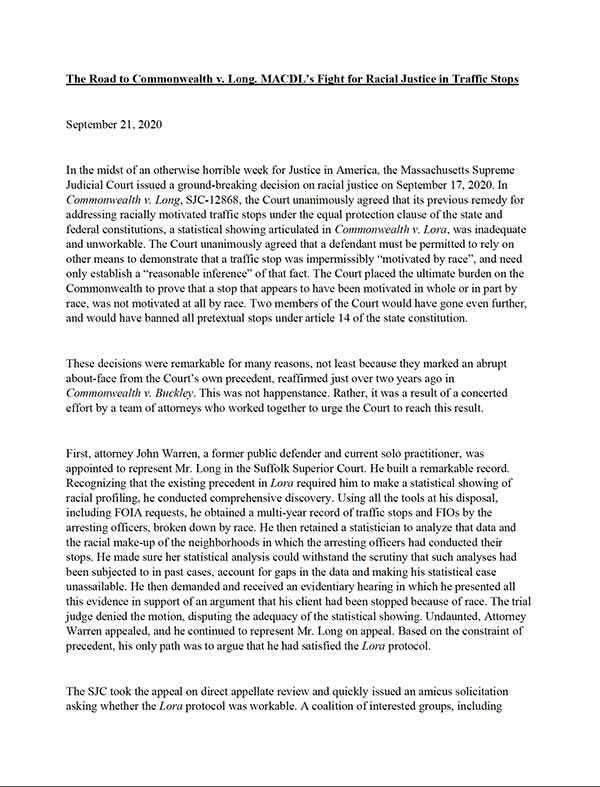 On January 4, 2021, MACDL filed an amicus letter, written by Attorney Amy Belger, in support of an application for Further Appellate Review in a case in which the trial judge concluded that members of the Narcotics Bureau of the Springfield Police Department intentionally destroyed evidence favorable to the defendant.

On 12/24/2020, MACDL, CPCS, and ACLUM filed a complaint in the Supreme Judicial Court alleging that Mass. Houses of Corrections still are not undertaking essential steps to mitigate the threat of COVID-19